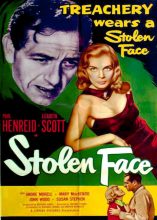 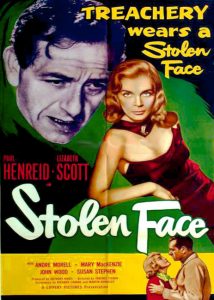 At the time there were only five commercial stations on the air: two broadcast on weekends only (ATV in London and ABC in both the Midlands and the North) while during the week London was served by Associated-Rediffusion, the Midlands by ATV and the North by Granada. It was standard practice for each of these to schedule recorded programmes, including feature films, locally rather than networking them (that is, sharing the transmission).

But on Tuesday 8 November 1956 all three weekday stations linked up to show  Stolen Face, the first time this had happened with a cinema film. It was however billed in published programme listings as a ‘play’ and scheduled in an hour-long slot from 9.00-10.00pm. As the full-length film ran 72 minutes it was clearly subjected to cuts to fit in not only the feature but commercial breaks; such heavy editing of films was not unusual on ITV and continued well into the 1960s.

Stolen Face was the first of thirty features produced by Hammer to premiere on ITV over the next three years (the BBC had shown Dick Barton Strikes Back, made in 1949, as early as 1951). They did not include any of the Gothic horror films that made the company world-famous at around the same time but consisted mainly of the low-budget thrillers and melodramas in which Hammer specialised before making it big. Ten of these, including Stolen Face, were networked, most of them being split into two or three episodes and shown on successive evenings (which at least removed the necessity for cutting). The only other one of the features to be networked as a single broadcast was The Saint’s Return (1953), shown on Boxing Day 1957.

Directed by Terence Fisher, Stolen Face is one of the more notable of these productions; for a detailed critical analysis see this post on the website Tipping My Fedora: https://bloodymurder.wordpress.com/2012/03/06/stolen-face-1952/