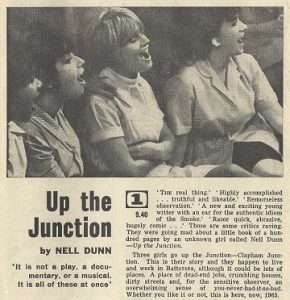 Up the Junction was included in the second series of The Wednesday Play, a weekly drama slot placed on BBC1 after the evening news and the current affairs programme Twenty-Four Hours. In this instance the play also followed immediately on from a Party Political Broadcast for the Conservative and Unionist Party – a choice piece of irony.

In his recently published memoir, The Day the Music Died: a Life behind the Lens (London: Constable, 2016), Wednesday Play co-producer Tony Garnett describes the genesis of the production. Loach had found Nell’s book and urged Garnett to let him direct it: ‘I knew it played to Ken’s strengths’, writes Garnett. ‘He was like a boy salivating over a train set in Hamley’s window’ (p. 139). He approved the project while the main series producer, James MacTaggart, was away on holiday (MacTaggart was furious when he found out) and smuggled it through shooting.

The play was partly recorded on tape for a few studio scenes but was mainly shot on film, on location, for which securing BBC permission was, according to Garnett, ‘like a fight to the death’. But it was the abortion (one of the studio scenes) that convinced him that the play should be made: ‘I would have cut off my arm to get that scene in front of the public’. He gives some credit for the success of the broadcast to the complaints made by his ‘nemesis’, Clean-up TV campaigner Mary Whitehouse: ‘Partly thanks to her, the audience was large, the publicity enormous and the controversy enjoyable. We’d even delivered a film before I had formally been made a producer’ (p. 141).

For Loach, who had already made three previous Wednesday Plays, Up the Junction was a career watershed. Although the credits state that the play is ‘by’ Nell Dunn, it is plainly the result of a director’s vision, as much made in the cutting room as on location. The scenes are discontinuous, impressionistic, capturing representative moments in the characters’ lives rather than telling their stories in strictly linear fashion. The camera stays close to the actors (or appears to, with the aid of long lenses) to capture the crush of social occasions in pubs and on the streets.

One figure, an unabashedly racist ‘tallyman’ (George Sewell), gives an account of himself direct to camera, and the soundtrack is a montage of voices, including that of a doctor giving abortion statistics. But Loach also intersperses pop songs in a manner that had not yet become mainstream: an invocation of popular culture – the characters’ culture – more often found at that time in avant-garde works like Scorpio Rising (1963) (no doubt coincidentally, both films contain fatal motorcycle accidents).

Writing in the issue of Radio Times for the week of transmission (see illustration), Garnett explained the creative rationale behind the production: ‘So many conventional plays seem unreal, and real people in documentaries often talk like actors. I said the other week [in RT] that we on The Wednesday Play would have to break some rules to tell the truth as we see it. So we told our director, Kenneth Loach, that none of the sacred cows of television drama need stand in his way. There were many risks involved in this freedom and he has embraced them with relish.’ (‘Up the Junction‘, 28 October 1965, p. 45).

Despite ratings success and critical acclaim Up the Junction was not repeated on BBC television until 1977, then again in 1993. In that year, on the occasion of its own seventieth anniversary, Radio Times surveyed a range of pundits for their opinions of the highs and lows of television history. Mary Whitehouse was unequivocal about the latter: ‘Television reached an all-time low with its plays in the mid-60s, many of which were vicious, cruel, racist, cynical, kinky and blasphemous.’ (‘Broadcast Views’, 23 September 1993, p. 60). ‘We should have paid her’, Tony Garnett told Sheldon Times earlier this week.

Available on DVD in the box set Ken Loach at the BBC (2entertain).