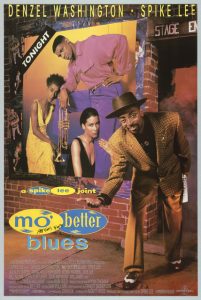 Sky Arts’ Saturday night with Spike Lee kicks off at 6.00pm with American Utopia (2020), his recent film of David Byrne’s Broadway concert series. It’s followed at 9.40pm by a new episode of the channel’s long-running profile series The Directors, devoted to Lee. But the centrepiece of the evening is a rare showing of the filmmaker’s fourth feature, Mo’ Better Blues (1990).

The jazz melodrama, a box-office flop, has not been seen on mainstream British television since 1999 (the last of four transmissions on BBC2), and its relative obscurity is undeserved. Here’s what I wrote about it when it was released in the UK in October 1990:

Jazz trumpeter Bleek Gilliam (Denzel Washington) is committed equally to his music and the two women with whom he is having affairs – Indigo (Spike’s sister Joie Lee) and Clark (Cynda Williams).

Each is aware of the other’s existence, each wants Bleek to devote himself to her exclusively, but he doesn’t want to choose. Meanwhile, he has problems with the inefficient manager (played by Lee himself) whose bad debts ultimately result in mob violence.

Though the setting is contemporary, the film has an old-fashioned flavour not entirely due to the musical milieu (which is superbly evoked in both the score and Ernest Dickerson’s rich colour photography).

It’s also to do with the surprisingly cosy, conservative way the story is rounded out – suggesting that Lee, for all his often self-conscious visual flair, is at heart a romantic moralist. 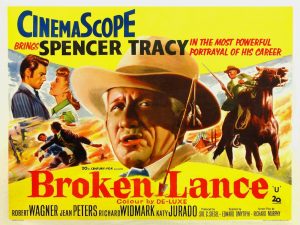 Paramount Network’s spate of Fifties western revivals continues at 2.50pm with Fred MacMurray in Good Day for a Hanging (1959) – one for the kiddies? – followed at 4.35pm by Gary Cooper and Rita Hayworth in They Came to Cordura (1959).

But set the recorder because they clash with Broken Lance (1954) on Talking Pictures TV, starring Spencer Tracy, Richard Widmark and Robert Wagner. It hasn’t been seen on terrestrial since 2014.

All three films are channel premieres.