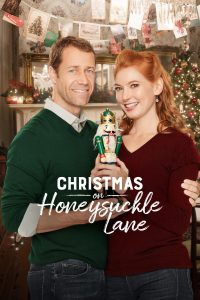 This last festive season I popped a personal cherry: I had never before seen a Hallmark Christmas movie. In the two-month run-up to the holiday – television’s extended pre-Christmas period, apparently intended to coincide with the gift-shopping season – more than fifty such films were shown on Channel 5 alone. Even BBC2 had a few. So I thought it was about time I broke my duck, schmaltz-wise, with Christmas on Honeysuckle Lane.

My choice of film was not arbitrary. This one was directed by Maggie Greenwald, who came to prominence with the neo-noir thriller The Kill-off (1989) and the gender-bending western The Ballad of Little Jo (1993), the latter of which I had recently re-seen and admired. Although Greenwald was hailed at the time as a promising talent, her few subsequent theatrical features apparently went nowhere and she found herself on the TV treadmill. According to IMDb, Honeysuckle Lane is her last completed film to date, though she has a new work in progress.

Besides the director, the lead actors are worthy of note. After her debut in David Lynch’s Dune (1984), Alicia Witt made her mark as a red-haired teenage killer in Fun (1994) and has since been prolific on both the big and small screen. Canadian-born Colin Ferguson is new to me, the only previous film I could have seen him in being The Opposite of Sex (1998), though he too has had a busy TV career. Though neither has exactly been hit by the ugly tree, Witt and Ferguson are sufficiently unconventional in their looks – they’re both in their forties, for a start – to add some piquancy to their characters.

Emma (Witt) flees the city and her boyfriend Ian to spend Christmas with her siblings in the small town where she grew up. Shopping for decorations, she meets-cute with Morgan (Ferguson) when they argue over the appropriateness of a blue ribbon on a Yuletide wreath. The wreath will reappear as a romantic motif and of course the not-particularly-rocky path to true love has already been set. Of course also, Ian (John Palladino in the Ralph Bellamy part) will turn up in town in an attempt to reignite his relationship with Emma, and Morgan will be seen with Another Woman to give the illusion of a rival, but there is no real doubt that the meet-cuters will end up together.

As a friend recently pointed out to me in a discussion of The Holiday (2006), a bigger-budgeted theatrical equivalent, the hallmark of made-for-TV romances is predictability. Nothing must disrupt the pre-ordained Happy Ever After. That is the case here, but a sub-plot adds a mildly intriguing touch of mystery: preparing to sell the family home with Morgan’s assistance, Emma finds a stash of old love letters that point to her late mother’s pre-marital affair. The gingerbread-gothic house is itself a symbol of family tradition in the manner of Meet Me in St Louis (1944), so we can guess that the sale will not go through. And so it proves. (Did I mention that there would be spoilers? They aren’t really.)

It’s not a good sign that the film’s production is credited to Synthetic Cinema International. Everything here is primed, processed and pre-digested. No signs of directorial individuality or literary originality are allowed to disturb the smooth, glossy surface. Much the same can be said of many a popular melodrama or rom-com from Hollywood’s past, so that’s nothing new, but one does have to wonder about the sheer proliferation of such films today. How must the once-indie Greenwald feel about submitting to this blandly feel-good regime?

Even so, my first visit to the House of Hallmark was a lot less painful than I’d anticipated. I’m reminded of Pauline Kael’s comments on Ice Station Zebra (1968), a favourite Bad Movie: ‘it’s terrible in such a familiar way that at some level it’s pleasant. We learn to settle for so little, we moviegoers.’

Christmas on Honeysuckle Lane isn’t terrible but it is pleasant. I quite enjoyed it while wrapping presents. There are far worse ways of spending 83 minutes, though how many more examples of its kind I could stand is open to question. We learn to settle for so little, we bloggers.

1 thought on “Hallmarks out of ten”