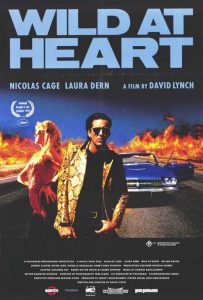 I am a reasonable man but I can be provoked. Some films light a blue touch-paper in me, and Wild at Heart is one of them. Stand well back.

In fairness, it’s been three decades since I last saw it, so perhaps I ought to give it another chance with Sky Arts’ presentation, which follows its profile of David Lynch in a new episode of The Directors on Sunday, 19 December. But here’s what I thought in September 1990, without benefit of hindsight:

“For years, controversial writer-director David Lynch has been able to persuade us that he’s a serious artist of great talent, vision and integrity, with a surrealist imagination all his own.

The seriously weird Eraserhead established his reputation; The Elephant Man consolidated it; Dune put a few cracks in it; and Blue Velvet shored it up again, with rash cries of ‘masterpiece’ all round.

Now, however, the game is up, the covers are off and the con-man has given himself away.

Wild at Heart – which carried off the top prize at Cannes and comes trailing its own scandalous hype – will undoubtedly be the cult movie of the year. But to my mind it is quite possibly the most blatant display of shameless self-promotion at the expense of sense, taste and intelligence to hit the screen this side of Ken Russell.

Loosely summarised, it’s a couple-on-the-run movie, with young Sailor (Nicolas Cage) and Lula (Laura Dern) taking to the road following his release from the detention centre where he’s been serving time for manslaughter.

They’re out to find happiness, independence and freedom from Lula’s hysterical mother (a risibly OTT Diane Ladd, Dern’s real-life mum), who fears that Sailor will reveal the sinister truth about her husband’s death and sends a homely private eye (Harry Dean Stanton) and a dangerous mob killer (Willem Dafoe) out to stop them.

En route to nowhere, the lovers meet up with as way-out a bunch of eccentrics and grotesques as one could hope to avoid, and become involved in some extremely bizarre, bloody and unpleasant incidents.

That none of this – the opening scene apart – is as disturbing as was presumably intended is due to sheer overload: with so much that is sick and offbeat, reality lacks a touchstone and everything becomes grist to Lynch’s shock-at-all-costs mill.

I’ll be sitting through it again to find out.

Later the same evening, Film4 continues its Mike Leigh retrospective with Career Girls, an alleged comedy. I hate this one, too. 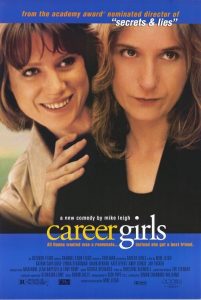 I’m not sure which is worse: the film’s patronising attitude towards its central characters or the irritatingly mannered performances of Katrin Cartlidge and Lynda Steadman. Here’s your chance to find out, in the film’s first terrestrial transmission in eleven years.