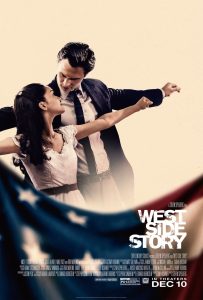 I first saw West Side Story (1961) on BBC1 on Christmas Eve 1972, sitting on the floor in my pyjamas after my Christmas bath, with my back leaning against my mother’s armchair. On Boxing Day 2021, I took Mam to see Steven Spielberg’s remake at the Odeon Silverlink.

The new film has been much praised, with good reason, though I have my reservations. The lead actors are not among them: contrary to some accounts I’ve read, Ansel Elgort and Rachel Zegler – neither of whom was previously known to me – are fine as Tony and Maria, more convincing than their cinematic predecessors. I knew the film was working when I began tearing up at their first meeting at the dance. After that, I was on side.

Some of the numbers are brilliantly staged, notably ‘America’ and ‘Tonight’, and Maria’s double duet with Anita (Ariana DeBose, excellent), ‘A Boy like That’ and ‘I Have a Love’, has great operatic intensity. Other songs benefit from being relocated, either in setting (‘Gee, Officer Krupke’ inside a police station) or in narrative placing: ‘Cool’ and ‘I Feel Pretty’ are transposed, the former coming before the rumble and the latter after, now taking place inside a department store where the Puerto Rican women work amid mannequin tableaux of WASP America. It’s one of a number of ways in which Spielberg and screenwriter Tony Kushner open up the story world, giving it more (literal) background detail as well as more pointed social commentary.

I’m less convinced about the wisdom of taking ‘Somewhere’ away from the lovers and giving it to a new character: Valentina (played by Rita Moreno, Oscar-winner as Anita for the 1961 version), the Puerto Rican widow of drugstore owner Doc, whose image we see only in a still photograph. It seems that this too was an attempt at a political statement, but it’s a fuzzily conceived one: when Valentina sings, solo, ‘There’s a place for us’, who is/are ‘us’? Puerto Ricans? People of colour? Immigrants? Partners in mixed marriages? 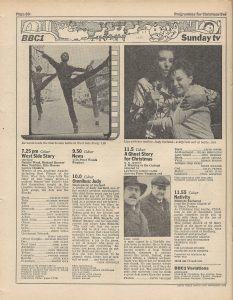 This creative decision also has a detrimental effect on the climax, when Maria and the dying Tony – no longer associated directly with ‘Somewhere’, even though it had been played over their lovemaking – now exchange a few bars from ‘Tonight’ instead. It has less emotional effect and Spielberg’s staging of this scene, with two shots fired instead of one and Valentina turning up once again to hand Chino (a better-developed nemesis) over to the cops, lacks the power of Robert Wise’s.

Is the remake superior to the original, as some are claiming? No. But it’s almost as good, most of the time, better in parts and a legitimate alternative interpretation, with all the caveats mentioned. I may like it even more on second viewing, when I don’t have to sit cross-legged waiting to go to the loo – there’s a reason why long movies used to have intermissions.

2 thoughts on “West Side Stories”